We, the members of the Podgorica Club,

Reaffirming the guiding principles of the Podgorica Club in the process of defining the common "Western Balkan Vision 2030" and the "New Narrative for the Western Balkans",

Welcoming the Commission’s Communication “A credible enlargement perspective for enhanced EU engagement with the Western Balkans” of 6 February 2018,

Acknowledging the progress made so far in the EU integration by candidate and potential candidate countries and their commitment to aligning with the Sofia Declaration of the EU-Western Balkans Summit held in Sofia, on 17 May 2018,

Taking note of the Council conclusions on Enlargement and Stabilization and Association Process adopted by the Council on 26 June 2018,

Fully supporting the conclusion of the Prespa Agreement, which has contributed to regional stability, intensified regional cooperation and to the enhanced Euro-Atlantic perspective of the Region,

Emphasizing the need for intensified pace in the implementation of the EU related reform agenda, with a special focus on the rule of law, especially fight against corruption, organised crime and violent extremism, good governance and strengthening of democratic institutions, public administration reform and fundamental rights in accordance with the UN Sustainable Development Goals,

Asserting that the Euro-Atlantic agenda for the Western Balkans has no alternative, and calls for mobilization of societies, thus applying the principle of all-inclusiveness in the implementation of urgent reform priorities,

Praising the role of the Regional Cooperation Council in the promotion of regional cooperation, implementation of Multi-annual Action Plan for Regional Economic Integration, as one of the main deliverables under the Berlin Process so far, as well as support to EU integration of the Western Balkans,

Call upon European Union and its leaders to keep the credible accession perspective alive, based on strict, but fair accession criteria, in accordance with individual merits and achievements,

Call on candidates and potential candidates to continue undertaking reforms aimed not only at fulfilling EU set preconditions, but also at speeding up the process of socio-economic convergence with the EU,

Underline the importance of keeping the enlargement momentum alive withadopting strategic decisions to all negotiating countries, candidates and potential candidates.

In this respect, it is crucial to adopt a decision on the date for opening of accession negotiations with North Macedonia and Albania

Remind that further delay of these decisions in the present geopolitical and geo-economic context could have detrimental impact on both, internal and regional developments. We all witness challenges to the global order based on democratic and shared society values, and their possible negative impact on the Western Balkans.

Retrograde policies of division, which oppose regional cooperation, instigate isolationism, containment policy and are founded on populism and not on shared values and European standards, are unfortunately not only remnants of the distant past and pose a serious threat to the Western Balkans.

These identarian policy ideas seem to be regaining their global relevance, threatening to further devaluate the concept of shared values and multilateralism, democratic norms and individual rights and freedoms.

On the 20th anniversary since the Stability Pact for South Eastern Europe was launched in Sarajevo, as a grand strategy of the security-stability-development nexus after terrible wars that took place, we, the members of Podgorica Club, stand ready to do our utmost to prevent the Western Balkans from falling once again victim of retrograde ideas and trends.

We, therefore, call upon the EU and all relevant international stakeholders of multilateralism to join our efforts, recognise challenges and help protect the European narrative of enlargement, reconnection and integration, not only through the bureaucratic norms of the Acquis Communitaire, but also with bold and forward looking political decisions. 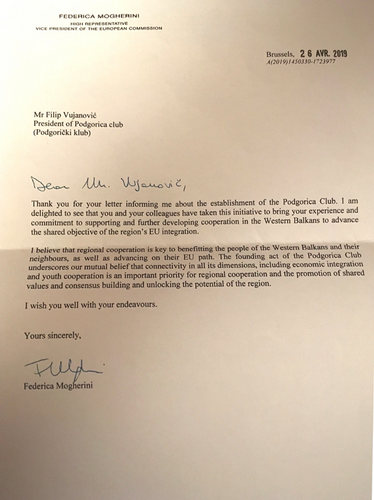 Closing remarks and recommendations of the Forum "Science and Innovation

2030 Vision for the Western Balkans", jointly organized by the Ministry of Science of Montenegro and the Podgorica Klub and held on 09 April 2019 in Ulcinj, can be downloaded HERE

The Podgorica Club and the Ministry of Science of Montenegro are organising the first in a series of high-level events dedicated to the Forum "Science and Innovation 2030 Vision for the Western Balkans".

The Forum will be held on 9 April 2019 in the Hotel "Holiday Villages Montenegro - Karisma Hotels Adriatic", Ulcinj, Montenegro.

The Podgorica Club is dedicated to the prosperity, preservation of good neighboring relations, regional cooperation and affirmation of the Region at the international scene, with the purpose to encourage the Vision 2030 of development of the Western Balkan Region in the field of economy, culture, science, research and innovation. The main concept of the Podgorica Club is described by the general title "New Narrative for the Western Balkans - Vision 2030", while the first in a series of high-level meetings will be dedicated to the current efforts of the Region in the field of science and innovation, as well as to the consideration of the common vision of development in this area by 2030.

More information on the Forum is available at the following website.